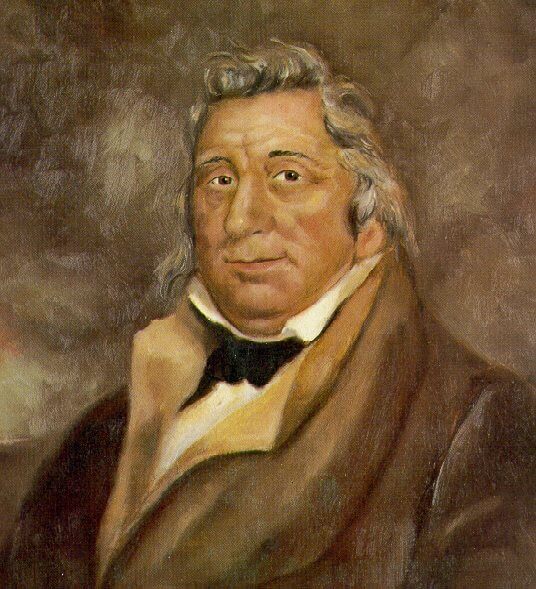 On June 23, 1765, a small boy was abandoned on a wharf at City Point (now Hopewell, Virginia). The eyewitness account of James Durell of Petersburg, Virginia states:

"... a foreign ship sailed up the James River, dropped anchor opposite the dock, and lowered a longboat to the water with two sailors in it. Then a boy of about five years was handed down and rowed to the wharf, where he was deposited and abandoned. The boat returned, quickly, to its ship. The ship weighed anchor at once, sailed back down the James River, and was never heard from again." The child did not speak English and no one understood what he said, except that he kept repeating "Pedro Francisco." Thus, the local citizens called him Peter Francisco.

He was described as handsome, of dark complexion, probably from Italy or Portugal. His clothing, though disheveled from the long ocean voyage, was of the best quality and his shoes had silver buckles engraved with the initials "P. F." Though confused, sad and lonely, his demeanor and bearing were courageous and engaging which led the local citizens to believe he was from a wealthy family – perhaps nobility.

At first the authorities gave Peter a bed in which to sleep in a warehouse on the wharf; and the local housewives saw to it that he was well-fed. Later in the year he was taken to the Prince George County Poor House where he remained until Judge Anthony Winston took him to his home, "Hunting Tower Plantation" in Buckingham County, Virginia. Peter worked as an indentured servant in the fields and the blacksmith shop for eleven years. He gained in strength and stature – reaching the height of six feet six inches and the weight of two hundred sixty pounds by the age of fifteen!

Judge Winston was a prominent planter and a dedicated patriot who vigorously opposed the tyranny of the King of England. In fact, many conferences were held at Hunting Tower where resentment brewed toward England. While living in this atmosphere, Peter understood at an early age the real importance of the growing struggle for independence of the colonies.

In the spring of 1775, Peter accompanied Judge Winston to Richmond, Virginia, where he stood outside St. John's Church and heard Patrick Henry deliver his famous "Give me liberty, or give me death" speech. Peter was so inspired that he wanted to enlist in the army at once! However, since he was only fourteen year old, Judge Winston made him wait until 1776 when he was sixteen. At that time, Peter was released from bondage and in December 1776 enlisted in the Tenth Virginia Regiment of the Continental Army under Colonel Hugh Woodson of Prince Edward County.

There are many account of Peter's bravery, strength and heroism during the American Revolution, including the Battles of Brandywine, Stony Point, Camden, Guilford Courthouse, his confrontation with Tarleton's Raiders, and Cornwallis' surrender at Yorktown.

Captain William Evans, who served with Peter in all the Northern campaigns, had this to say: Francisco "was the second man who entered the fort and distinguished himself by numerous acts of bravery and intrepidity – in a charge which was ordered to be made around the flag staff, he killed three British grenadiers and was the first man who laid hold of the flagstaff and being badly wounded laid on it that night and in the morning delivered it to Colonel Fleury. These circumstances brought Mr. Francisco into great notice and his name was reiterated throughout the whole army."

Perhaps it was stated best by General George Washington, himself, who stated that "without him we would have lost two crucial battles, perhaps the War, and with it our freedom. He was truly a One Man Army."