History of the Society

1960's - 2007: Quintus Massie, who served many years as the Society's first president and later as treasurer, did continuous historical research. Among his many useful contributions were a Peter Francisco Chronology, which became the basis for a more detailed understanding of Peter's life, and several subsequent books. He uncovered many previously-unknown historical documents. Quintus was honored as the first lifetime member of the Society. He passed away in 2007.

January 19: Resolution No. 7RC - proclaiming that a park in the City of Newark, NJ, be renamed Peter Francisco Park.

1971: Society of Descendants of Peter Francisco is founded.

The Society sponsored a watershed lecture by Dr. John Manahan in which he described discovery of a historic document, believed to be Peter Francisco's baptismal certificate, in the Azores.

1972: At the request of the Society, Locust Grove was placed on both The National Register of Historic Places and the State Register of the Virginia Historic Landmarks Commission.

1973: The Society played a key role in passage of Joint Resolution 200 in the Virginia State Legislature, declaring March 15th of each year to be Peter Francisco Day. To give credit where credit is due, Massachusetts had passed a similar bill 20 years earlier (in 1953); Rhode Island followed in 1954.
Leadership for these pioneering successes was provided by past and present members and honorees of the Portuguese Continental Union. Peter Francisco's importance has now been recognized by resolutions in other states.

1979: SDPF receives a grant for partial restoration of Locust Grove from the Virginia Historic Landmarks Commission, with federal matching funds from the U.S. Department of the Interior.

1980: Publication of Peter Francisco: The Portuguese Patriot, by William Arthur Moon. The Society provided timelines and additional research assistance to the author. (While the author did not take all of the advice provided by the SDPF and its Advisors, the book represents a compilation of many of the materials on Peter Francisco that were available at the time. It has been an important work-book for Society Members when advancing historic research.)

1986: Phase I restoration of Locust Grove.

1987: The Longwood College in Farmville, Virginia Summer Field School conducted an archaeology dig at Locust Grove. This was by invitation of the SDPF and led by Dr. James W. Jordan, Ph. D Professor of Anthropology and Director of the Archaeology Field School. The dig was covered by Olde Times Magazine.

1997: SDPF advised on the information regarding Peter Francisco included in a mainstream textbook for middle school students entitled, American History, The Early Years, by Donald A. Ritchie and Albert S. Broussard (19997: Glenco/McGraw Hill).

1998: Edith Francisco Buckley traveled to Terceira Island, Azores, Portugal. She toured the island and visited Igreja Catolica Santo Ant6nio, believed to be the baptismal place of Peter Francisco. Also in this year, the Portuguese Reader's Digest published a short synopsis of Peter's life.

2002: The first Lifetime Memberships in the Society were presented to J. Quintus Massie and Edith Francisco Buckley "for outstanding and faithful service as member, officer, and representative of the Society since its organization in 1971 and for faithfully fulfilling the purpose of the Society ..." In addition to receiving certificates, Lifetime Members are exempt from the payment of dues to the Society.

Edith Francisco Buckley participated as both a member of the Society and the National Society Daughters of the American Revolution in a grave-marking ceremony held at Peter Francisco's final resting place in Shockoe Cemetery. This commemorated Commonwealth Chapter's one hundredth anniversary.

2003: "Walking in Peter's Footsteps" slogan was adopted for use in newsletters to promote holding our meetings in a variety of locations.

2007: (New Bedford, Massachusetts) John Duke IV, President of SDPF, and Edith Francisco Buckley, participated in the rededication of the Peter Francisco Memorial sponsored by the City of New Bedford and the Massachusetts Society of the Sons of the American Revolution.

Francisco J. Mendonca and Edith Buckley were interviewed by the Portuguese-language television program, Contacto, which presented a brief summary of the story of Peter Francisco. The program can still be viewed (2014) at PGM 162 EUA Contacto NJ - Peter Francisco.

2009: Descendant Donald Pruitt, Ph.D., and his wife Alla, completed genealogical research on the family of Peter Francisco and his first wife, Susannah Anderson. The genealogy is available to all researchers on the Society website www.peterfrancisco.org/genealogy. 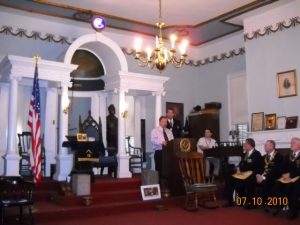 2010: The Peter Francisco Memorial Scholarship Committee was created. The scholarship will promote the purpose of the Society and help defray the cost of a college education to a qualified, graduating high school senior. Committee members: Jane McCroskey, Chad Pike and Elizabeth McLeod (Chairperson).

October 10: A Commendation was presented to John Andrew Duke, IV for serving as President of the Society from 2004-2010. 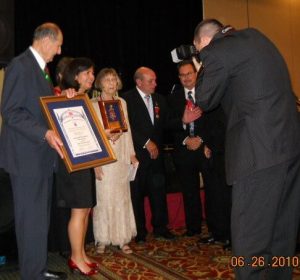 July 10: Richmond, Virginia - The honor of a Memorial Lifetime Membership in Perpetuity was conferred upon Peter Francisco by the Richmond Randolph Lodge of the Freemasons. Society members were invited guests at the ceremony and reception held afterwards. Many of our nation's founding fathers, including George Washington, Benjamin Franklin and John Hancock, as well as Peter's friend, the Marquis de Lafayette, were Masons.

2011: The Library of Virginia is procured as a permanent home for the archives of the Society by Sue Terminella.

Gail Coffman accepted the position of Historical Advisor to the Society.

April 2: Buckingham County, Virginia - A certificate bestowing Memorial Life Membership to Peter Francisco as a charter member of Mason's Hall Lodge 1785, A.F. & A.M. was presented by Barrye Absher to Libby McLeod on behalf of the Society.

November 11: Veteran's Day - Richmond, Virginia - Society members attended the unveiling of a new marker placed at the foot of Peter Francisco's tombstone in Shockoe Hill Cemetery. The marker was placed by the Richmond Chapter of the Virginia Society of the Sons of the American Revolution. 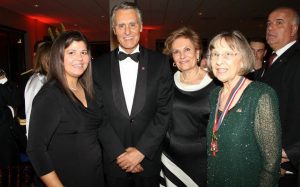 March 10: Richmond, Virginia - The Society presented a framed reproduction of the portrait of Peter Francisco that hangs in the State Capitol of Virginia to the Richmond Randolph, No. 19 Masons Lodge, and hosted a reception following the presentation. 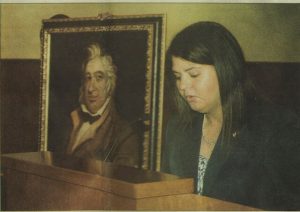 October 9: Buckingham County, Virginia - A second reproduced portrait of Peter Francisco was presented to the Buckingham County Board of Supervisors. The portrait hangs at the entrance to the auditorium which bears Peter's name of the new administration building. The Library of Virginia assisted in the reproduction process.

March 16: Richmond, Virginia - The Society met at the Library of Virginia to celebrate Peter Francisco Day and to deliver Society records, etc. for storage in the Archives of the Library.

Libby McLeod shared the Proclamation by the Honorable Martin O'Malley, Governor of the State of Maryland, which declared March 15, 2013, as Peter Francisco Day in Maryland.

May 23: Buckingham County, Virginia - On behalf of the Society, President Libby McLeod awarded the first Peter Francisco Memorial Scholarship of $500 to Jennifer Walker, a graduating senior at Buckingham High School.

October 19: The library in the Maysville Manor Bed & Breakfast in Buckingham, Virginia, was dedicated in honor of Peter Francisco by owners Herbert and Nancy Maxey.

Celebration of the 250th Anniversary of Peter Francisco's arrival in America.

Descendant Sue Terminella completed genealogical research on the family of Peter Francisco and his second wife Catherine Fauntleroy Brooke. The genealogy is available to all researchers on the Society website here.

February 26: Through the efforts of Gail Coffman, New York State Resolution No. 692 was passed recognizing March 15 at Peter Francisco Day.

March 10: Gail Coffman's efforts were also beneficial in the passage of the Proclamation recognizing March 15 as Peter Francisco Day in Pennsylvania, and celebrating the 250th anniversary of Peter Francisco's arrival in the American colonies.

North Carolina Certificate of Recognition for the role Peter Francisco played in the Battle of Guilford.

Governor Chris Christie of New Jersey sent a letter of recognition for Peter Francisco to Gail Coffman on behalf of the Society. 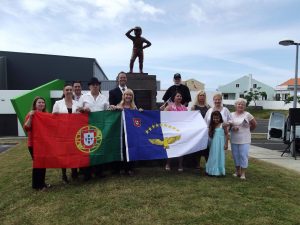 June 20-25: Trip to Terceira Island, The Azores, from which Peter Francisco was abducted in 1765.

October 17: Meeting in Hopewell, Virginia, where Peter was abandoned.

Winner of our 2016 Peter Francisco Memorial Scholarship is Dakota J. "Coty" Willey of Spring Hill, FL, who will be attending the University of Central Florida, Orlando, FL.

Presentations made by member Don Pruitt about Scott's Lake, The Little Nightcap, and Peter's presence during the return visit to Virginia by the Marquis deLafayette are included on the Society's website.

October 22: The title of President Emerita was bestowed upon founding member, Edith Mae Francisco Buckley, during the ceremony honoring her for her many contributions to the Society at our meeting in Williamsburg, VA. Read Edith's letter of gratitude here, or see the February 2017 issue of the Society's newsletter, The Virginia Giant.

March 11: Special guest at the Society's celebration of Peter Francisco Day in Virginia was Nancy Rodrigues, Secretary of Administration for the Commonwealth of Virginia.

Winner of the Peter Francisco Memorial Scholarship is Annie Cao of Yorktown, VA, who is attending the University of Virginia in Charlottesville, VA.

September: Board voted unanimously to combine the Society’s Annual Business Meeting with the Celebration of Peter Francisco Day in Virginia in March of each year (or any other designated date).

Winner of the Peter Francisco Memorial Scholarship is Tyler Belfield of Chesapeake, VA, who is attending the University of Virginia in Charlottesville, VA.

Libby McLeod was presented with a framed Resolution in recognition for her service as President of the Society from 2011 thru 2018.

July: By unanimous vote by the Board, the name of the Society was changed to Peter Francisco Society. 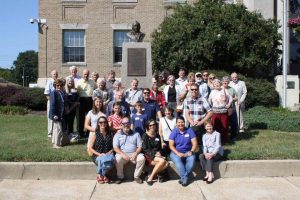 July: Established an Outreach Committee whose goal is to be an advocate for the Peter Francisco Society; to reach out, encourage and develop a relationship with individuals, businesses, organizations or members of the community to assist the Society in enriching and preserving Peter Francisco's legacy.

March 15: For the first time in the history of the Society, the annual business meeting was cancelled because of the Coronavirus pandemic.

A Commendation for Allen Branch Childress, past president of the Society from 1990-2004, was presented to his family.

April 24: The 500+ page Ancestry of Peter Francisco, compiled by our Historical Advisor, Gail Tonkens, and Dr. Joao Ventura of The Azores, Portugal, was presented to the Society.

May: Sue Terminella completed updated Genealogies of Peter Francisco and his first wife Susannah Anderson, and of Peter and his second wife Catherine Brooke, and posted them on the Society's website. (Versions from 2011 were moved to Genealogy/Archives.)

Winners of our Peter Francisco Memorial Scholarships were Mollie C. Brown who is attending The College of William & Mary, Williamsburg, VA; and Davon Young who is attending Virginia Wesleyan University, Virginia Beach, VA.