Near Philadelphia, Pennsylvania, British General Cornwallis' troops flanked General George Washington's troops and were routing the Americans. It was during this battle on September 11, 1777 that Peter stood his ground at Sandy Hollow Gap and inspired the other soldiers to do likewise. This enabled Washington to have time for an orderly retreat. Peter was wounded in the leg and the Marquis de Lafayette was wounded, as well. On Sunday, September 21, the wounded Marquis arrived in Bethlehem, Pennsylvania for medical treatment. He was hospitalized at the Sun Inn and then housed at the home of George Frederick Boeckle. It is not clear if Peter was with him there, but records indicate that they recuperated together and became good friends. Peter healed quickly and was able to rejoin his regiment. 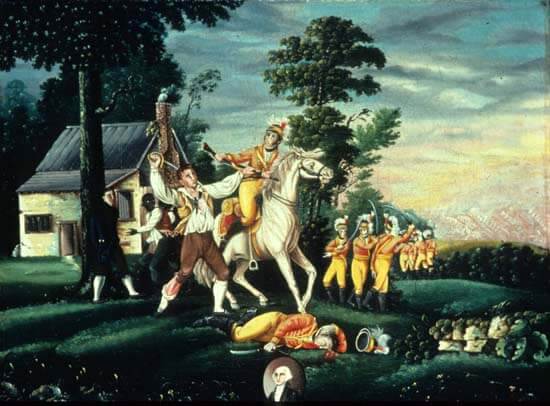 General George Washington appointed General Anthony Wayne to command an army hand picked from the Light Infantry for the assault on the British fortress at Stony Point. This elite unite of "commandos" was selected personally by General Washington – Peter was one of the elite! Twenty, including Peter, were chosen to clear a path with axes through two heavy rows of abates, ascend the steep stone cliff, and lead the others into the fort. Lieutenant Gibbon was the first over the wall and Peter was second! Seventeen of the twenty "commandos" were killed or wounded. Peter received a 9-inch stomach wound, but killed his adversary and two others.

After his three-year enlistment expired, Peter re-enlisted – this time with the Virginia Militia under Colonel Mayo. At Camden on August 16, 1780, British Generals Webster and Rawdon and Colonel Tarleton attacked and drove the Colonials back in disorder. Colonel Mayo and Peter tried to rally the Virginians, but to no avail, and they were forced to join in the retreat. Peter shot a grenadier who tried to bayonet Colonel Mayo and stood his ground against a British cavalryman, sidestepping two sword attacks, and then lifted the cavalryman out of his saddle with his bayonet. Peter then mounted the horse, rode through enemy lines, caught up with Colonel Mayo and insisted that he take the horse and hurry on. (Colonel Mayo never forgot Peter for his bravery and for saving his life, and later presented Peter with his dress sword.)

As Colonel Mayo left, Peter noticed that the artillery horses which had been pulling a cannon had been killed. Knowing that the cannon would be captured if left, Peter loosened the 1,100-pound cannon, shouldered it and carried it to safety! (This miraculous feat of strength was immortalized in 1975 by the issuing of a commemorative, 18-cent stamp by the U. S. Post Office.) 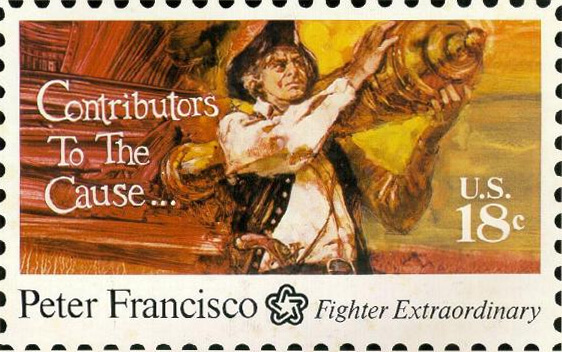 The Battle of Guilford Courthouse, fought on March 15, 1781, was considered the bloodiest and most decisive of the Revolutionary War. It was related that here, Peter Francisco performed deeds without parallel. He cut down eleven men with his broadsword; had his leg pinned to a horse by the bayonet of a guardsmen – but, as the soldier turned and fled, Peter made a blow with his sword and managed to "cleft the fellow's head down to his shoulder before he fell." The broadsword Peter used was six feet long with a five foot blade. It had been ordered especially for him by General George Washington after Peter had complained that the one he had been using was far to small for him.

During Colonel William Washington's cavalry charge, with Peter in the forefront, the Colonials were driving back the British. Cornwallis ordered his artillery to fire grape shot directly into the center of the fight, thus killing many British as well as Colonials. It was then that Peter received his second serious wound of this battle, and fell from his horse. He was left for dead on the battlefield until a Quaker named Robinson found him, took him to his home and nursed him back to health.

After recovering from his wounds from the Battle of Guilford Courthouse in North Carolina, Peter walked back to Cumberland County, Virginia and finished his recuperation until given a special assignment to reconnoiter Tarleton's Raiders. At Amelia, Virginia, Peter outwitted nine of the raiders, killing three of them, routing the others, and confiscated their horses. The story is best told by Henry Howe, who wrote in 1845:

"While the British army were spreading havoc ... in Virginia, in 1781, Francisco had been reconnoitering, and while stopping at the house of a Mr. Ward, ... in Amelia, ... nine of Tarleton's cavalry came up, ... and told him he was their prisoner... Believing him to be very peaceable, they all went into the house, leaving him and the paymaster together. ‘Give up ... all you possess,' said the latter, ... 'or prepare to die.' 'I have nothing, ...' said Francisco... 'Deliver ... those massive silver buckles which you wear on your shoes.' 'They were a present from a valued friend ... give them into our hands I never will'... The soldier put his saber under his arm, and bent down to take them. Francisco ... stepped one pace in his rear, drew the sword ... and instantly gave him a blow across the scull. 'My enemy,' observed Francisco, 'was brave and though severely wounded, drew a pistol, and, in the same moment that he pulled the trigger, I cut his hand nearly off. The bullet grazed my side. Ben Ward (the man of the house) ... brought out a musket, and gave it to one of the British soldiers... He mounted the only horse they could get, and presented it at my breast. It missed fire ... A short struggle ensued. I disarmed and wounded him ... Tarleton's troops of four hundred were in sight. All was hurry and confusion, which I increased by repeatedly hallooing ... 'Come on, my brave boys, now's your time; we will soon dispatch these few, and then attack the main body!' The wounded men flew to the troop; the others were panic struck, and fled. I seized Ward, ... but the poor wretch begged for his life... The eight horses that were left behind, I gave him to conceal for me... arleton had dispatched ten more in pursuit of me, I made off. I evaded their vigilance. I ... fell on their rear. I went the next day to Ward for my horses; he demanded two... Finding my situation dangerous and surrounded by enemies ... I went off with my six horses. I intended to avenge myself on Ward ... but ... I should not be his executioner, for he broke his neck by a fall from one of the very horses.'"

On October 19, 1781, Peter joined his friend Marquis de Lafayette at Yorktown, Virginia, and witnessed the surrender of General Cornwallis. Final treaties were signed in 1783 and the war was over!