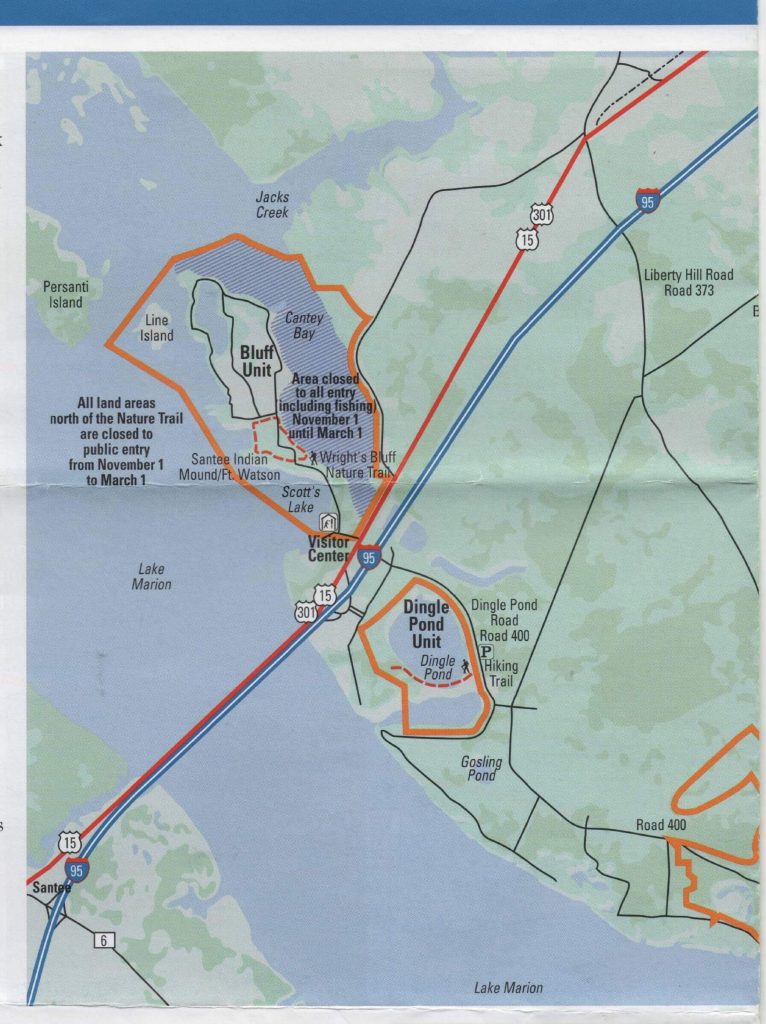 What Is "Scotch Lake?"

Peter Francisco described an event in 1781 at "Scotch Lake," where he stole a hogshead full of clothing and
several horses from British forces occupying a fortified position atop an Indian mound. [See Note 1, below.] This was most certainly what was in Peter's day a small body of water known as "Scott's Lake" [Note 2], which lay on the left bank of the Santee River near the settlement of Santee, South Carolina. When the river was dammed for the creation of Lake Marion, the waters of Scott's Lake were subsumed into those of the new, larger lake. Today, both are named and indicated on the map [attached] of on-site points of interest at the Santee National Wild Life Refuge, published by the U. S. Fish and Wildlife Service. [Note 3]

That map also shows the location of the Santee Indian Mound and Fort Watson. This British fort was in 1781 the site of two battles between Patriot and British forces, one (a British rout of Patriot troops) on February 28, 1781, and a second, on April 22, 1781, in which Patriot forces enjoyed a major victory. I have always assumed that Peter participated in the first one; but rather, after my investigation of the action which Peter described in his petition for pension [Note 4], I have come to believe that he was in neither one. He could not have been in the second, as he by then had been badly wounded at Guilford Court House. As for the first battle, Peter himself never mentioned being in combat at "Scotch Lake." Rather, his activities there, as he described them, speak clearly of deeds of harassment and reconnaissance. That there could have been such harassment is supported by General Greene's letter of February 9, 1781, to George Washington [Note 5] informing of his strategy to create a 240-man unit composed of "... the infantry of Lieut. Col. Lee's legion and 60 Virginia riflemen making in their whole 700 men which will be ordered with the militia to harass the enemy [my emphasis ... DBP] in their advance...."

Peter's stealing a hogshead of clothing and several horses right from under the British troops' noses is an action of harassment rather than combat. Peter never says, as far as I can learn, that he fired a shot at "Scotch Lake." Therefore I propose that his activity there was exactly what Gen. Greene had ordered carried out: harassment, in this instance by the confiscation of enemy supplies and their subsequent use by the Patriots. This activity obviously occurred before the First Battle of Fort Watson. One of the liberated horses, which Peter kept for his own use, could have easily carried him to Guilford Court House in time to participate in the battle on March 15.

In early April, 2015, my family visited the Santee Fish and Wild Life Reserve at Lake Marion, SC, and found the mound just as Peter described it. The illustrations accompanying this article show both the mound and the subsumed waters in Lake Marion in just the spot shown on the map. Very interesting is another map in Mills' Atlas (Note 2) which predates the damming of the Santee River and clearly shows both Fort Watson (the Indian mound) and Scott's Lake.

Therefore I submit that "Scotch Lake," which was the way Peter heard the name pronounced and which thus entered the record, was actually Scott's Lake and should be so recognized. 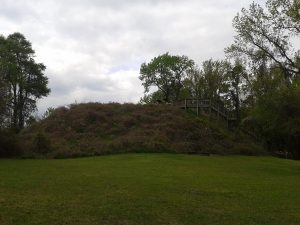 This photo shows the Santee Indian Mound, atop which the British established Fort Watson, and from the base of which in March 1781 Peter liberated several horses and the hogshead full of clothing. Photo by Steven Pruitt. 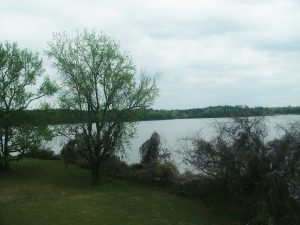 This photo shows today’s Lake Marion at the spot where I posit the now-submerged Scott’s [“Scotch”] Lake. Photo by Steven Pruitt.