The Little Nightcap and Peter Francisco 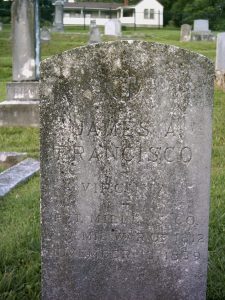 Judith Woodson Michaux Francisco, the wife of James Anderson Francisco and thus the daughter-in-law of Peter Francisco, was of French Huguenot descent. Her ancestors had been forced to leave their home in Nantes, France, to escape religious persecution after Louis XIV in 1685 revoked the Edict of Nantes, which had until then ensured French Protestants the right of freedom of worship.

In an attempt to get his children away from the Catholic education which would have been forced upon them, Moses Rochet and two of his daughters (the daughters were by then in Holland) designed a ruse to smuggle the youngest daughter, Suzanne, across the well-policed frontier to join them by cryptically calling her in their plans by a nickname, “The Little Night-Cap,” which the girls had left behind when they left France. The ruse worked, and they were reunited in Holland. Suzanne eventually went to England and married there another Huguenot, Abraham Michaux; the couple emigrated to America and raised fourteen children. Among her descendants was Judith Michaux, born in Abingdon, who became Mrs. James Anderson Francisco. 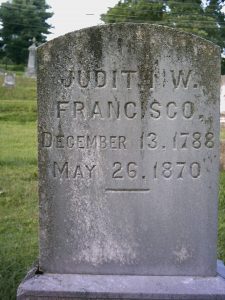 We learned that James Francisco is buried in Abingdon, Virginia. When our family made a driving tour of Virginia, while in Abingdon we visited Sinking Spring Cemetery to look for his grave, and found that of Judith as well — they are buried there side by side. Photos of their gravestones are below. A descendant of this union, Nannie Francisco Porter, the author of THE ROMANTIC RECORD OF PETER FRANCISCO, became active also in the Huguenot society.

The story of Suzanne and her exodus, by the Rev. W. D. Morton, D.D., is too long to be inserted here. It may be found complete on Internet as “History and Will of Abraham Michaux & Suzanne Rachette [sic]”.